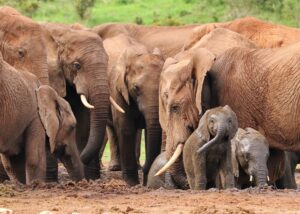 Campaigning for Asian and African Elephants in Captivity

Zoos and circuses force elephants into captivity—a lifetime of innately abusive psychological, social and physical poverty. Elephants suffer without the open spaces, herds and ecosystems where they evolved for millennia in Asia and Africa. In the wild, elephants are able and blessed to express their intricate and profoundly deep social relationships within multigenerational herds. It is where the females live out their entire lives with others they’ve known since birth. The males eventually leave to form bachelor herds and relationships with bulls where they learn how to be male elephants.

Elephant home range ecosystems are rich in complexity and challenges suited to their innate intelligence. Elephants are not elephants without their ecosystems. In zoos and circuses, we see only the damaged remnants of who they would be in the wild. In zoo and circus captivity, elephants suffer painful, debilitating diseases unique to captive conditions. Zoos and circuses teach us, and children, how not to see and think about what is really happening to them and other confined species. They know you will stop supporting them once you realize the truth. A zoo and circus “education” means you won’t understand elephants from the elephants’ perspectives.

Zoos accredited by the Association of Zoos and Aquariums (AZA) have better standards than roadside zoos. They still can’t provide elephants what they need for physical, emotional, and psychological health; Captivity is incompatible with their needs. Circus captivity imposes additional injustices, and unique forms of abuse and suffering.

Elephants presented in zoos and circuses are ghosts of who they would be in the wild and cannot represent their species. That is one of the many reasons zoo education misses teaching you what wild elephants are like, their ecosystems, and what they need from all of us: the freedom to be elephants.

Green Vegans campaigns to get elephants out of zoos, circuses, and private “ownership” and into GFAS-accredited sanctuaries. When we convince zoos to do that, their resources can be directed to the needs of wild elephants and all wild species. If they re-dedicate the funds they now spend on captivity to species in the wild, then they could transform the work of slowing and stopping extinctions. 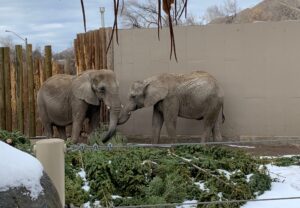 African elephant mother Christi, kidnapped from the wild, is 36. Her daughter Zuri, born at Hogle Zoo in Utah, is 13. They have been alone since Hydari died in 2015.  Hydari was Christi’s only elephant contact since 2008, when Misha died. All of Hogle Zoos elephants came from the wild. The majority died unnaturally young in the high desert of Utah at 4,865 feet elevation. Social isolation is abuse.

Elephants in zoos die younger and have a higher mortality rate for newborns than those in the wild. They suffer psychological and physical diseases unique to captivity. We at Green Vegans have read the veterinary records detailing the pain elephants suffer, pain that grows into the agony of diseases like osteoarthritis in their feet and legs and infections in their toenails and footpads. The most common diseases are gastrointestinal and dental issues, skin lesions, lameness, and foot lesions and infections  .

What else are zoos hiding?

Elephants are forced into pregnancies through artificial insemination, an invasive procedure that is repeatedly attempted. If a calf results and survives, she/he will be held captive forever, seeing a very small part of the world through bars or within the walls of a barn. In captivity, elephants are dying more quickly than surviving birth. The net loss of elephants means zoos have a long, sordid history of kidnapping elephants from the wild, from their ecosystems, families, and herds. Traumatized, they are flown to North America, Europe, China, and elsewhere.

After the steel bars define their captivity, they often are traumatized repeatedly from being shipped to one or more other zoos for breeding or display. There is transfer-trauma when faced with another unfamiliar place. Zoos and circuses repeatedly shatter their social bonds critical to their emotional and psychological health. In the bewildering unfamiliar zoo, they are forced to live in close spaces with elephants they don’t know—sometimes causing fights and deaths.

Zoos want you to believe their intentional corruption of the term “elephant herd”. Herds describe elephants in the wild. There are no herds at zoos. Instead, they are artificial collections of elephants that bear no semblance to wild herds. Zoos teach you to believe without questioning the ridiculous and ecologically nonsensical idea that elephant “herds” belong in North America.

Some zoos infer or claim we need “elephant herds in North America as a safety net in case they go extinct in the wild. Wild elephants are under threat, but zoos are killing wild elephants with that assurance to the public, don’t worry, we’ll still have these captive ghosts to soften extinctions. Zoos have the potential vision of setting up shop where wild elephants live to do their research, educate the public online, and support the many people in Africa and Asia who are as passionate and able to save elephants.

Zoos want you to believe saving endangered wild elephants requires captivity when, instead, it kills them at zoos and in the wild. To understand wild elephants is to see the depravity of keeping them captive. 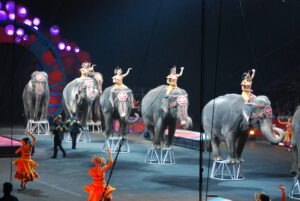 Circuses demand elephants perform unnatural tricks and force them into hellish, unnatural lives. In addition to what we have described about zoos, circuses impose additional, unique abuses. They are confined to even smaller spaces than most zoos.  They truck elephants on a grueling schedule from one carnival show to the next, day after day, to noisy, concrete-floored arenas. Then elephants are demeaned further, requiring they plod in small circles while children and their clueless parents ride their backs. We have seen schedules of ten performances four days in one town before taking them to the next one. Like zoos on steroids, they cause transfer-trauma and deny them any chance to live as elephants.

Elephants in circuses are controlled with a sharp-pointed tool called a “bull hook” to cause pain. AZA-accredited U.S. zoos have recently phased them out. Chained in trucks, under threat, in the heat and the cold, they are prisoners. Circuses also get paid to loan elephants to other circuses. With circuses constantly on the move, USDA veterinarians and inspectors, and medical resources, are seldom around.

Entertainment is about abandoning them

Like zoos, circuses entertain visitors for a brief moment before the crowd moves on. The elephants don’t get to leave. Look at any photo of a herd of wild elephants, and then look at their enslaved lives in circuses to get the perspective elephants need from us.

A reliable education about elephants and their ecosystems is found in documentaries,  books, and online. Instead of paying zoos and circuses to fund their cruel captivity, donate to organizations based in Asia and Africa that protect elephants. Then support our campaigns below.

Green Vegans has identified the number one sponsor that keeps elephants confined to circus hell in North America. We will be announcing a four-year campaign to end that sponsor’s support of circuses soon.

Stay tuned. Join us, and support us in exposing the truth and ending the abuse and suffering of elephants.