Alert! Comments Needed Now to Protect Birds and Ecosystems From Drones
Background: The Federal Aviation Administration (FAA) has begun to update regulations on the operation of drones. What they do now will set the stage on how much or how little birds, wildlife, people, and ecosystems will be protected from the hundreds of thousands to over a million drones that will soon fill the air. The FAA has excused itself from any environmental reviews but is taking comments on its proposed rulemaking. 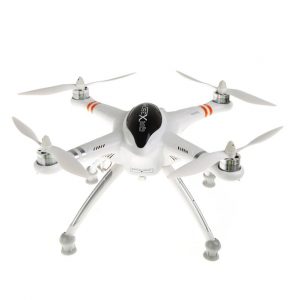 This QR X350 PRO drone is being sold on Amazon’s “Drone Store.”

Green Vegans has sent them seven pages of comments. They are far more detailed than needed for yours. The deadline for electronic submission is midnight, April 24. This is the FAA page relevant to the issue but you do not need to study it. Green Vegans has done that for you. This is the page where you  submit your comments. Click on the blue “comment now” button. Use the talking points below.

Wildlife, ecosystems, and people will be heavily impacted as the number of drones increases. We need vegan environmentalists to be visible advocates immediately.

The FAA thinks it can get away with ignoring the National Environmental Policy Act (NEPA) because it is addressing one class of drones and not the others until later. However, NEPA requires federal agencies to look at cumulative environmental impacts. Our goal is to get the FAA to first conduct an Environmental Assessment and then an Environmental Impact Statement under NEPA.

Cut and paste, or write in your own words these comments:
• Vegan environmentalists understand the consequences of human behavior and agency decisions that destroy ecosystems and accelerate the loss of biodiversity. Our response to the Notice of Proposed Rulemaking (NPRM) for the Operation and Certification of Small Unmanned Aircraft Systems (UAS), docket number FAA-2015-0150 is that the FAA must conduct an Environmental Impact Statement (EIS) under NEPA before proceeding further.
• According to Unmanned Aircraft Systems (UAS) Service Demand 2015 – 2035 Literature Review & Projections of Future Usage, “… the following are projections of UAS fleet size by user in 2035: Department of Defense ~14,000, with additional ~5,000 having optional pilot augmentation (Air Force ~3,500; Navy + Marines ~2,500; Army ~10,000); Public Agencies (Federal, State, & Local) ~70,000. Total UAS vehicles will approach ~250,000 by 2035, of which ~175,000 will be in the commercial marketplace.” Significant is the fact that these figures do not include the far larger number of users in the model/hobby UAS category. Amazon.com is reportedly selling ten thousand drones per month.
• The FAA decision to categorically exclude NPRM FAA-2015-0150 from the NEPA statutory requirements by implementing FAA Order 1050.1E, in paragraph 312f, is arbitrary and capricious.
• I refer the FAA to the following extraordinary circumstances under paragraph 304 that are being created by new Unmanned Aircraft Systems/drone technology and the flood of these aircraft predicted to fly in the National Air Space for all classes—public, civil, and model. Their environmental impacts by each class and cumulatively on the human environment include, as listed under paragraph 304: 304c. An impact on natural, ecological…or scenic resources of Federal, Tribal, State, or local significance; 304d. Cause a division or disruption of an established [human] community,…; 304f. An impact on noise levels of noise-sensitive areas; 304g. An impact on air quality or violate local, State, Tribal, or Federal air quality standards under the Clean Air Act Amendments of 1990; 304i. Effects on the quality of the human environment that are likely to be highly controversial on environmental grounds; 304k. Likely to directly, indirectly, or cumulatively create a significant impact on the human environment….
• The FAA is committing to actions before obtaining the clarity, data, and broadened public examination of the issues that can be created only through implementing NEPA.
• This FAA regulatory action is controversial and extraordinary in that it unleashes impacts upon ecosystems and the human environment across the nation without an examination of the extraordinary circumstances we have cited per paragraph 304.
• Drones/UAS will provide substantial benefits and advantages for protecting ecosystems and human well-being. Nevertheless, they must be used as tools appropriately and in numbers that will not erase birds from the sky nor create social and environmental harms to the humans below. Their new and unique presence and characteristics are precedent-setting. What must stop is the increasing numbers of UAS—public, civil, and model drones—being allowed to fly without appropriate NEPA examination and social approval.

Congratulations! You are a founding advocate of the Vegan Environmentalist Identity Campaign! Share this widely. There are more issues to come. If you are receiving this from a friend, please subscribe to our website. And please donate to support our work through PayPal also at our website.