Green Vegans Report In From NYC 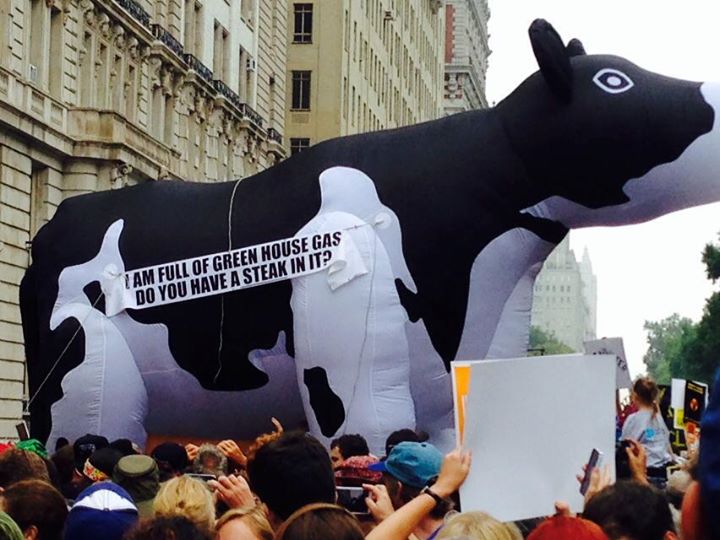 The People’s Climate March was held at 2,808 events in 166 countries. Owen was our representative for the NYC event. He had this enthusiastic response.

“The march was a smashing success in NYC. I’ve never seen so many vegans in one place! It was actually a little chaotic though, there was barely room to stand before the march started moving, it took several hours to start moving, and after it did start moving we (the vegans) got separated. Were I to do it again, I’d try and organize the vegans to pause periodically to create space in front of our signs so that our materials/signs etc. were more visible.

I met up with Kip and Keegan [producers of Cowspiracy]. They had a large banner and there was a giant inflatable cow by them that read ‘I’m full of greenhouse gases. Do you have a steak in it?’

There were tons of creative and informative signs. Cowspiracy dvds were handed out and the film was promoted amongst the crowd where it matters most: folks who care about the environment.

The best opportunity to distribute the t-shirts seemed to be just before the march started, when all the vegans were together. I gave them out to vegan marchers, who clearly understood the green<->vegan connection. (I was shocked at the sheer number of such vegans — HUNDREDS, from all over the country — it’s really changing fast!)

I personally handed out hundreds if not thousands of leaflets, including Green Vegans bookmarks,

material from PETA (“Meat’s Not Green”), Vegan Shift (“A Solution Today: Go Vegan!”), and Mercy for Animals (“Another Inconvenient Truth”).

The reception was interesting; most marchers responded positively by saying something along the lines of ‘I get the connection, that’s why I’m vegetarian’ or ‘I’m working to change my habits’ — only a small handful of folks wanted to argue that meat could be green (and there wasn’t much opportunity to debate). It struck me that by and large, we are winning this demographic over rather quickly. We don’t have much opposition, what we mostly have is ignorance.

You could see a little bit of cognitive dissonance happening in some folks between their desire to continue eating animal products and their care for the environment — which is exactly the point, and I was happy about having a hand in that. I’m hoping some friends will post photos of me but I haven’t found any just yet.

It was exhausting, but all told it was really well worth it and I would totally do it again (and again and again!). Really glad so many vegans showed up to share the message. This was really a once in a lifetime opportunity to reach people.”