A Green Vegans View of the People’s Climate March 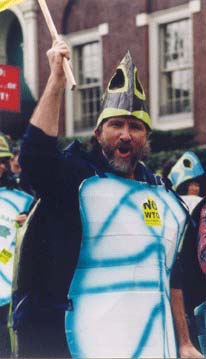 Green Vegans will be represented in New York and Seattle at the People’s Climate March. Our participation in two Seattle organizing meetings was welcomed. We were given time to speak, propose, and vote. It mattered little in the end because the strategy of the majority of organizations represented there reflected the lead organization, 350.org. It remains oriented to recruiting social-political justice advocates to forge a broader climate change movement that includes minorities, indigenous cultures, and labor. This will demonstrate the global character of the movement that demands change from the institutions of government and corporations, and through international agreements.

For the Seattle march, there is a focus on ending dependence on fossil fuels, creating green jobs with living wages, and taking the political / corporate institutions to task for their failures to protect both people and the environment. Broadening the diversity of the climate change movement, demanding a clean energy economy that creates jobs with livable wages, and telling the government and corporate powers to work on behalf of the people and climate are essential. However, there is not “one solution” to climate change as the organizing majority states. There are many solutions, each based on the transformations we must make in the way we live. Green Vegans was the sole vote at the Seattle organizing meeting in favor of including in the official event statement that people have the power to effect change through personal responsibility—the proven effectiveness of veganism and lowering human populations, for instance. We were told that the strategy of personal responsibility to effect change was a failed approach of past environmental campaigns.

Since its founding in 2009, Green Vegans has criticized mainstream environmentalists and their organizations for refusing to address human overpopulation and veganism as responses to ecological destruction. Animal agriculture grew in power and size as it consolidated its corporate grip on government policies. A foolish and unsustainable growth of human population continued to increase its demands on ecosystems while people pushed deeper into wildlife habitat every day. The environmental communities’ strategies in the last half century have won many difficult victories through unceasing work and personal sacrifice. But because environmentalists feared the issues of veganism and human overpopulation, we are at this point today where climate change and the loss of biodiversity are increasing more rapidly than ever.

So, there we sat as the Seattle climate march organizers cited a defective environmentalist strategy as the reason to now reject the message of personal responsibility—forgetting to note that veganism and population reduction were not advocated as personal responsibilities. 350.org is repeating the same fatal mistake as the environmentalists before them. They are avoiding the issues that are essential to planetary survival. The most effective actions within our personal control are veganism, reduced consumption of goods and services, and a reduction in conceptions.

Visible vegans are welcome to participate in these marches, but our knowledge and approach are otherwise excluded as being an effective and acknowledged equal. I was told earlier by a vegan who attended an organizing meeting in New York City that veganism was never mentioned. This is a gut-wrenching, tragic irony about the climate march leader and organizers. Bill McKibben and 350.org have rejected veganism and population reductions in its strategy. It will be interesting to see if greenhouse gas-spewing animal-sourced food is offered to marchers at the main New York City People’s Climate March.

A year ago, I approached a church on a quiet street in the Queen Anne Hill neighborhood of Seattle. I knew Bill McKibben was addressing supporters in the church meeting room. The street was empty and I saw Bill McKibben as we walked towards each other. He was alone, doing what leaders do best, forging forward quietly on character and passion for the cause. As it happened, we walked up opposing stairs, and at the top landing, still outdoors, I briefly introduced myself, and gave him a copy of my book, This Is Hope: Green Vegans and the New Human Ecology / How we find our way to a humane and environmentally sane future. I asked him to consider the value of veganism in the struggle against climate change and consider the content of my book. He thanked me and we went on our separate ways. So, here we are, vegans gladly supporting climate advocacy while still being ignored by 350.org and its leaders.

If we do not make ourselves seen and heard as vegans at rallies everywhere they are being held, this latest social movement to slow and then reverse climate change will fail for the very same reasons the environmental community has. Go to the rallies, bring your vegan banners, literature, and signs to inform the people. Urge them to see Cowspiracy, the documentary that will change their minds and may very well be able to make the climate movement more whole. Tell them to stop ignoring the science, compassion, and common sense that substantiate the irrefutable case for veganism. If they continue ignoring veganism and several other issues, they will be wasting our time by giving false hope which in its failure is a threat, not a solution.