Green Vegans board members have been at the core of this issue since 1995. We’ve been here before, and have helped stop the whale hunt in the past. With your advocacy and support of Green Vegans, we can do it again. Before going further, save and use this link to the National Marine Fisheries (NMFS) website to access instructions, documents including the DEIS, and information about the meetings in Seattle and Port Angeles, WA. 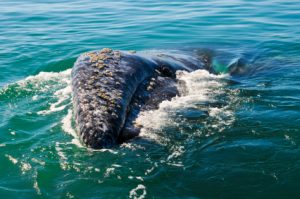 We’ve organized the following talking points for your use. Pick and choose, present in your own words at the public meeting regarding the Draft Environmental Impact Statement (DEIS) on the Makah tribe’s effort to kill gray whales off the Washington coast. We have included links to suggested comments from other organizations at the end.

To Start: Please read the Executive Summary in the DEIS (link above) that contains the six options being considered. One of your comments will advocate for Option1—No Action. The Makah would be denied the legal cover to kill gray whales.

Note: The closing date for written comments is June 11, 2015. We and other organizations have requested that date be extended for several reasons we won’t go into here. Remember, you likely will have only 3 +/– minutes to speak at the meeting. You can give the NMFS written comments at this meeting but we urge you take advantage of the time between now and June 11 as we continue reviewing the 1,200-plus page DEIS and additional documents. We will post comments on this website that are far more thorough and specific for you to use at least two weeks before the June 11 closing date. Those comments will have a greater impact.

For this NMFS meeting, we suggest the following:

As you introduce yourself, say something about how you will be  impacted personally should the Makah kill any whales. An example would be that you would no longer want to go whale watching because it creates trust between people and whales. That makes gray whales vulnerable to the cruelties of Makah harpoons and guns. That is a deep loss to you.

Dear advocate, the above comments just scratch the surface but will give you an idea of what a small section of the DEIS reveals. The work we need to do is extensive. Please donate to Green Vegans now at www.greenvegans.org. We are volunteers but there are expenses.

See you at the meeting!