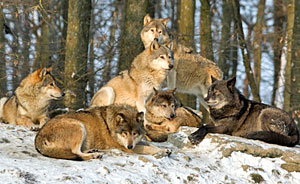 From the Green Vegans perspective, wolves will be persecuted, suffer, and be genetically disfigured as long as animal agriculture exists. It is too large an empire that occupies vast areas of ecosystems, including public lands—our national forests, Bureau of Land Management lands, and some national wildlife refuges managed by the Fish and Wildlife Service. In addition, state’s also lease public lands for grazing.

This is an opportunity for vegans to strengthen their reasons for remaining vegan and also to share with non-vegan friends that wolves are being hunted down because the meat and dairy industries are incompatible with healthy ecosystems. Wolves are not only shot, there are archery and trapping seasons that states have established. This is not only inhumane, it is a lack of justice. Wolf hunts are not ecosystem management schemes; they are instead political and economic manipulations to protect an animal agriculture industry that is irrelevant to our evolution.