After an investigation and documentation of unregulated toxic air pollution coming from many Seattle restaurants, including Whole Foods* and the Nickerson Saloon and Grill, that cook meat, Green Vegans petitioned both the city council and the mayor’s office to address the problem. They have not responded, so we have alerted the public with a media release later today. Seattle is not alone as this.is a national problem. It is yet another environmental and health impact related to the animal agriculture industry and the violence waged upon sentient beings. 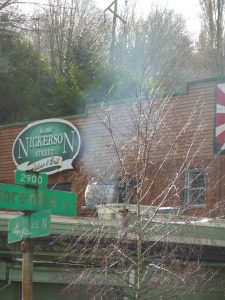 Commercial cooking of meat in restaurants and food markets produces toxic air pollution that is being vented onto—and inhaled by—people in Seattle, a city that lacks code to establish air quality standards and enforcement authority to the Department of Planning and Development. Green Vegans documented this pollution before petitioning the city council and the mayor’s office in early February to address the problems.

“Breathing in particle pollution can increase the risk of early death, heart attacks, strokes, and emergency room visits for people with asthma, cardiovascular disease, and diabetes. Particles are smaller than 1/30th the diameter of a human hair. When you inhale them, they are small enough to get past the body’s natural defenses. Ozone and particle pollution are both linked to increased risk of lower birth weight in newborns.”[i] Children are at far greater risk from pollution because they breathe more rapidly and inhale more pollutants per pound of body weight than adults.[ii]

For every 1,000 pounds of meat cooked, 33 pounds (or 3 percent of the weight of each hamburger) goes into the atmosphere in the form of particulate matter.[iii] An 18-wheeler diesel engine truck would have to drive 143 miles on the freeway to put out the same mass of particulates as a single charbroiled hamburger patty.[iv]

The Puget Sound Clean Air Agency website notes, “In our region, particle pollution, smog, and air toxics pose the greatest risks to our well-being…. An estimated 1,100 people die each year in Washington State due to outdoor air pollution.”[v] The U.S. Environmental Protection Agency (EPA) states that, “Most of these restaurants [across the U.S.] have under-fired charbroilers, creating a significant amount of particulate matter (PM) and volatile organic compounds (VOCs) that have been classified as health and environmental hazards….”[vi] VOCs undergo chemical reactions when exposed to sunlight and produce ozone harmful to lungs.

Said Will Anderson, “Green Vegans campaigns to end all meat, dairy and egg consumption because of its massive environmental impact, violence, and injustice. The toxins vented on people and the environments remind us of that fact.”

* Late in 2014, the visible and dramatic pollution vented from Whole Foods, Westlake Avenue, Seattle, stopped suddenly during Green Vegans’ investigation. It apparently continued for years beforehand given a complaint was filed with the city in 2010. That complaint alleges the Whole Food pollution (directed directly on a bus stop, pedestrians, and drifted to nearby residences) existed since 2008.