Stop the Devil’s Egg Bill aka the Rotten Egg Bill 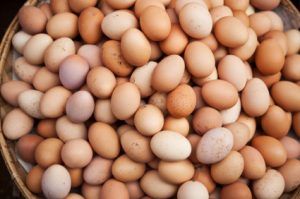 Unmoved by critics who condemned what was called the “rotten egg bill” in 2012 (US Senate Bill 3239), the same nonprofit animal welfare organizations have returned with their 2013 effort, The Devil’s Egg Bill. It is weaker and more harmful to egg-laying chickens than last year’s version. The 2013 Senate Bill 820 is a misguided return to an animal welfare mistake that locks you, me and every organization and state out of improving the lives of chickens forever entombed in animal agriculture. Go here to see a side-by-side comparison of the 2012 and 2013 bills. S.820 is fairly convoluted with special rules applicable to California only because of that state’s legislation, Proposition 2, that had set cage and confinement standards for chickens and individuals from other species.

The highlights of S. 820: Egg Products Inspection Act Amendments of 2013

AFTER reading this posting, immediately contact your congressional representatives. Tell them you oppose the Egg Products Inspection Act Amendments in all bills. Use the information below and feel free to cut and paste it into your emails to them. Call the Congressional switchboard at (202) 224-3121 or go to http://whoismyrepresentative.com/

“shall imposes an obligation to act, but may be confused with prediction of future action”
“must imposes obligation, indicates a necessity to act”

The impacts that this (must/shall) language change will have on egg-laying hens is up to Senators and attorneys to debate, but the plain English use of “must” in the original bill appears far more robust than “shall” in the 2013 Act. That change should be opposed.

No person, organization, or state government may improve on any provision of this Act if it differs from the Act though betters the lives of hens. And, there is no sunset language in this bill that would allow individuals, organizations, or states to make improvements after 2029—in effect, forever—unless Congress passed a newer bill.

S. 802 is convoluted and complex in its proposed changes. I’ve not included all of them. Though there are deep disagreements about what strategies best serve laying hens, in this case the end result of this Act leaves intact an insanely cruel industry. For whatever relief supporters of this Act believe they are providing for these hens, most consumers will certainly think the issues about chickens in animal agriculture have been settled. For all the petition-gatherers, and the once believable reputations of mainstream “animal groups”, it is essential they take another look at this disaster of a bill. You tried to negotiate with the largest industry imaginable and lost. This bill must be defeated. Your alliances with industry, pig slaughter businesses, retail meat outlets, and celebrity chefs must stop. Their intent is to increase the slaughter and all the terrible consequences chickens and other species experience in animal agriculture in their awareness minute by minute.

We must review the vegan movement’s mission and the diversity of its messaging. Diversity can be a strength, and I believe it is still. But there are lines that have been crossed. One of them is the arrogant assumption any subset of organizations has a right to stop all future “improvements” and lessen the remaining cruelties, if not end them, by the rest of us, including state governments. We operate within a constantly changing environment that requires adaptive strategies. It’s time to refine those strategies, and stop legislating the institutionalization of the slaughter billions of chickens who need us to stop the industry, not enable its continued existence.

Do we believe consumers are too stupid, uncaring, overwhelmed, and incapable of personal change? Or do we follow the examples of other justice movements that succeeded when it seemed impossible? When we defeat this bill, we will have an enhanced responsibility to stop animal agriculture’s harm and death for all chickens and other species. What could we otherwise accomplish by 2029, when this act “shall” allow up to 144 square inches of living space for some chickens? The New Human Ecology, a vegan human ecology, is an efficient platform we will continue to promote for all chickens, individuals from other species, people, and ecosystems. Kill the bill. And then work together on a different strategy.

FOR ADDITIONAL BACKGROUND and documentation about this proposed Act, be sure to study these websites and support their work as well: United Poultry Concerns and Humane Farming Association.